There’s nothing else quite like playing slide guitar: the sounds and tones you can produce using a slide are in a world all of their own. No longer are you limited to just the notes made when you fret a string; now you have infinite variation all along the string. No longer are you limited to simply bending a single note with your fingers; now you can slide (or effectively “bend”) a complete chord if you so desire!

When you’re playing slide guitar, remember that you’ve essentially changed your guitar into a different instrument. As such, you have to treat it quite differently than you’re used to. Here are a few tips to get you started on the right track: 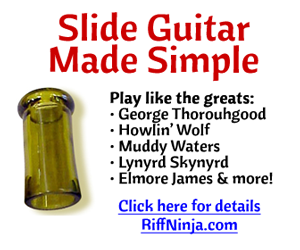 Aim the slide directly over the frets. If you play where your fingers normally play, you’ll end up playing all your notes flat. Your finger normally presses the string down at that point, but it is the fret itself that is actually contacting the string, and therefore that is your marker for where your new point of contact (the slide) needs to go.

Try using a pretty heavy slide. Let the weight of the slide itself do the work of pressing against the strings, if you’re pressing that slide down too much you’re very likely going to be pressing the strings down into the frets and causing other sounds which you don’t want. There are many different types of slides and materials to experiment with, all of which will feel different and produce different tones, but a good general starting place is glass or metal.

Use both hands to mute the strings. If you play with your slide on your index finger, you’ll have nothing to trail behind the slide to dampen the string vibrations there. Put the slide on your 2nd, 3rd, or 4th finger and use the other fingers to dampen right behind the slide, without actually fretting the strings. Also work on using your right hand to dampen the strings not being played as much as possible. Much could be said about this technique, but for now, just start thinking about how you can apply that to your playing.

Setup a guitar specifically for playing slide. Slide guitar has different requirements than playing guitar normally does. You’ll want a higher action, and likely some form of an alternate tuning. If possible, it is best to have a guitar setup specifically for playing slide, although if you’ve only got one guitar, don’t let that stop you from experimenting. Here are some slide guitar setup tips.

Start with an open tuning. Many people grab a slide and just try using it on their guitars – in standard tuning – and quickly become frustrated trying to get a good sound. The secret to getting a quick start is in using an open tuning where the slide can cross all six strings anywhere on the fretboard and always produce a chord. Open D tuning (or open E – they’re basically the same thing) is a great place to start.

If you’re serious about learning to play slide guitar, then our course Essentials of Slide Guitar is a great place to start. If you’ve just got a few minutes today, then you can also checkout the list of lessons below. Enjoy!